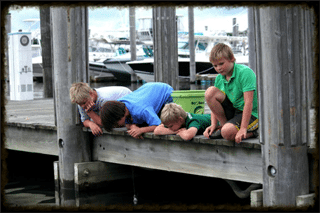 Today, I am a businesswoman and busy mother of four teenage boys, included are a set of twins. Two of my sons were diagnosed with moderate to severe autism when they were very young; one at 23 months (one of the twins) and our youngest son at 18 months.

I was 5 months pregnant with my youngest son the day I learned the diagnosis of one of the twins. Our eldest son, adopted at birth, was 3 years old at the time, feisty and out and about to explore the world. Life was crazy and fun with three toddlers running around the house and another one on the way. However, I noticed differences in development between the twins. While one seemed happy and hit his expected milestones, the other child was aloof and rarely joined in play with his two brothers. Sometimes he had a distant gaze that left me uneasy. It was difficult to explain this uneasiness to others. My concerns were met with words of reassurance: “It’s just first-time parent worries,” You shouldn’t make comparisons between twins,” “We have other family members who were slow to talk – just give it time,” “He will be fine – stop worrying!”

As time went by, my worries grew. I noticed that my son spent an unusual amount of time spent lining up matchbox cars turning them upside down one by one, all in neat little rows. He would repeat the process over and over. If anyone tried to join in the play, my son would drop to the ground, inconsolable, until the intervening person left. Then, the process would start all over again. He walked on his toes and he carried unusual items in his hands. It didn't seem to matter what items, it just absolutely had to be 1 yellow and 1 red. He carried strips of yellow and red paper, the red letter A, and yellow A, and anything he could find that covered the red/yellow color scheme. He would keep the "travel items" in his hands the entire day, even while eating or playing with other toys. It seemed as though he would run around our kitchen island endlessly, high on his toes, making high-pitched, piercing squeals.

At Mom's Club play dates, I spent most of my time keeping my boy from putting gravel or wood chips in his mouth. At other times, he clung to me like a baby monkey, sometimes for hours on end, refusing to let go of me. At the beach, he would grip me fearfully if I tried to put him down in the sand. He left welts all over my neck, as if in mortal fear of touching that sand with his toes. When he finally began to crawl, a month after his twin, he crawled backward for the first month. He also put his pacifier in his mouth upside down, and, as much as we tried, we could not change that. A horse and chariot could ride through our living room, and I don't think my son would have noticed it at all. He lived in his own world.

Meanwhile, his twin was playing with his older brother, laughing, exploring the world, constantly babbling, and just seeking to be the center of attention. The differences between the twins became more apparent and alarming every single day. After appointments with the pediatrician, I initially felt an incredible high, a sense of relief, when he told me that my son was meeting his milestones and that he is on track. When I mentioned autism, my pediatrician said he was "way too social" to have autism. But, as always, at night, I couldn't sleep and I would sit at the computer, querying "autism symptoms" but they did not fit my son. Then, one day, I queried “Toddler and Autism Symptoms” and there was my son right in front of me. It was an intense moment, in the middle of the night, all alone. Immediately, I began to purchase books about autism. It was through my reading of “Let Me Hear Your Voice” by Catherine Maurice that I learned about ABA. At first, I didn’t believe that my son would ever need the recommended 30-40 hours per week – I reasoned with myself that just maybe a few hours a week and he would be just a typical kid. Now pregnant with my youngest, I clearly remember the creeping, worrisome feeling as I read about her second child’s diagnosis, with my last son gently kicking inside me.

The day of diagnosis was the first day of the beginning of a long journey. That day is etched in my memory forever. My suspicions were confirmed - that my twin son was “on the severe end of the spectrum.” It was indescribable - an out of body experience. On the drive home from the specialist, I kept repeating to my husband, "Is this a dream? It is, isn't it?" I looked back at my child in his car seat and thought that the child I thought I had, was never really that child. When we arrived home, my husband turned to me, we hugged tightly and he cried. That's the one and only time I have seen my husband cry.

After we came to terms with the shock, we knew what to do and, shortly after the birth of our youngest son, we got started with an intensive ABA program. We found an exceptional provider in northern Virginia, where we were living at the time, and our son started making excellent progress. Painfully aware of the statistics regarding families with multiple children on the autism spectrum, we kept a close eye on the youngest, cherishing each day he showed no signs of autism. While the program was expensive, and we were paying out of pocket, as, at that time, insurance was refusing to pay for ABA, it was worth every penny as we saw the changes in our son. Thankfully, most insurance companies are now covering the costs of this therapy.

We could see the light at the end of the tunnel. While our son was by no means finished with his therapy, we could see his progress and reasonably project that eventually he would be mainstreamed without an aide. Then our lives were shattered again. Autism manifests itself in many ways. In the case of our twin, he simply stopped developing socially and began to sink into his own little world. Our youngest son, who was developing normally and showed no signs of autism, regressed. He would come running to the door when my husband came home from work. And then, one day, he didn’t, and we both knew. To have a second child diagnosed with autism was a surreal experience. We could see the progress that his brother was making, and we knew where to get help for him. We could realistically hope for similar progress, so the news itself wasn’t as devastating as it was the first time around. The problem became financial because, as we had been scraping by raiding college funds, the cost of ABA for two children now exceeded my husband’s take-home pay. We would not be able to do this without serious financial help. We relocated to a small town in New England known for having strong funding for ABA programs sight unseen. Fortunately, we were able to move back to Northern Virginia when ABA therapy ended.

We were lucky. We were able to locate the resources to build and fund our own in-home program. We found an exceptional BCBA and we were able to hire a number of talented and enthusiastic people to provide one-on-one therapy for 30 to 40 hours per week per child. My husband and I interviewed/hired/fired/juggled schedules & paid staff, completely overseeing the entire program. That was a daunting task, but we learned, and it eventually became second nature to us. We managed to cobble together enough financial support to make it possible, although we were still out of pocket for a good-sized chunk of the cost.

Our sons entered preschool and had our private ABA therapists with them throughout the school day. Their progress was amazing. With the help of their Therapists, they were able to learn to interact on the playground, participate in circle time, and engage in all typical preschool activities. They thrived in their preschool, which had experience with children with developmental delays, but even the experienced teachers noticed how significant the progress that both boys made.

Entering public kindergarten, private ABA therapists in the classroom were a tough sell. We were in a small school district, and their experience with this treatment for autism was still limited. With the help of our BCBA, strong documented progress, and an open-minded Special Education Director, we were able to continue our program in public school. The correctness of this decision was borne out by the progress he continued to make. His in-class support was faded out during the first grade, and, as he prepared to enter second grade without any extra help, we had a much easier conversation with the school concerning our youngest son, who entered kindergarten that year.

I left a fulfilling career as a Special agent in Federal Law enforcement to pursue a passion closer to my heart. I attended Simmons College and received a Master of Science in Behavior Analysis. I started a company providing ABA services for young children with autism. Our staff is skilled, passionate and dedicated, with years of experience in Special Education classrooms.

We have seen first-hand the positive effects that this life-altering program can yield. We realize that no two children are alike and that each child is impacted in his own, unique way and have his own, unique issues. We realize that ABA is not a magic bullet and that some children respond better to it than others. While not all children will experience the “optimal outcome” that ours did, the scientific literature indicates that the overwhelming majority of children on the spectrum will receive a substantial benefit from intensive behavioral therapy. I am determined to help families and children to reach their fullest potential in life. That may simply be the words, Mommy and Daddy, those of us with children with autism do cherish.